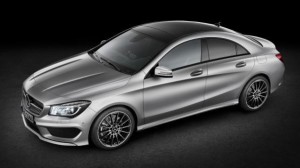 While pricing has not been announced, the CLA which is designed to resemble a downsized version of the CLS, is rumored to start below the current C-Class Sedan.

The CLA-Class is aimed at winning over young Gen Y buyers, who comprise 75 million people in the U.S. and now are reaching car-buying age, but are not aspiring to buy a Mercedes.

The CLA is powered by a turbocharged 211-hp 4-cyl gasoline engine equipped with a start/stop eco system and coupled with a 7-speed automatic dual-clutch transmission.  It will also be the first front wheel drive Mercedes-Benz.